After six days of relative solitude, pitching for the night on a grass verge amongst a small sea of TGO challengers in Dalwhinnie marked a watershed. By the end of today, and one last stretch walking alone, I’d enter the sociable side of the challenge and begin to realise what makes the TGO so special.

Dalwhinnie is an odd choice for an overnight in many ways. There’s a chance for a shower to wash the grime away, fill your face with bacon butties and cakes, and sink a few bottles of Scottish ale. It’s also a funnel bringing together challengers approaching from all angles and channelling many of them on towards Braemar.

But there’s not really much to the village itself, almost nondescript you could say, and sat as it is just off a fairly busy road it didn’t really take much effort to drag myself away and get back onto the trek.

There was nothing too imaginative about my route today, a very well worn line across to Gaick Lodge before an easy way through to Glen Feshie. Easy, but unexpectedly enjoyable none the less. 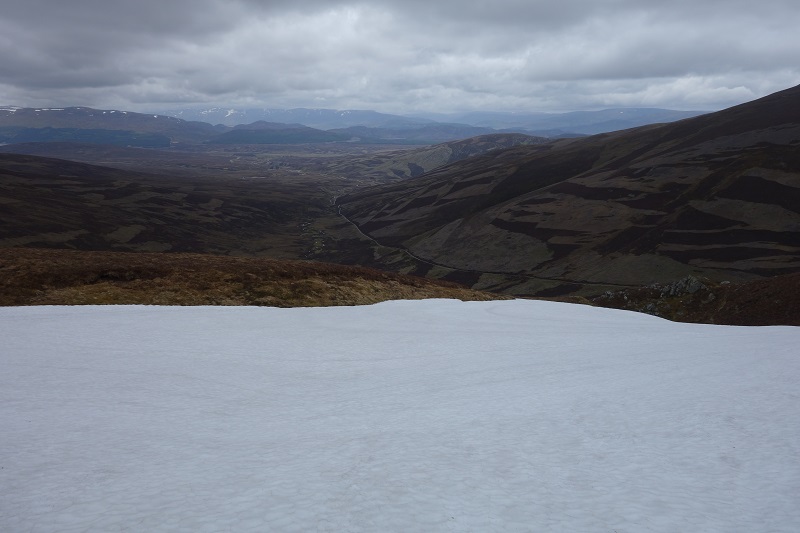 Looking back to Dalwhinnie from the top of Allt Choire Chuaich

It looked like there’d be quite a crowd of people following the same route so I leapt from my tent like a bed wetter and got a flyer while others were still packing. From the map I hadn’t looked forward to the first stretch, following an aqueduct for 6 km to Loch Cuaich, but if nothing else the miles passed easily and it was a cool and breezy morning. It would stay cool all day.

A track from the loch then took me east towards Bogha-Cloiche before dumping me pathless on a steep lung burster through deep heather up Coire Chuaich, at the top of which was the remains of a hard packed winter cornice which I was forced to round. 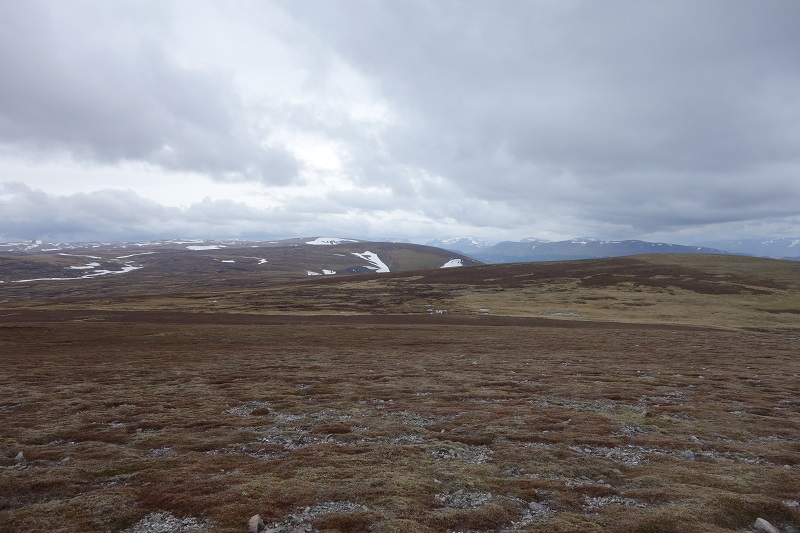 I’d planned to stay south of the minor tops and pick up the usual path descending steeply down to Gaick Lodge, but the plateau looked inviting with its hard packed ground and short heather so I headed across it, over Bogha-Cloiche aiming to drop down to the north end of Loch an t-Seilich instead.

It was a delightful diversion in the company of deer, with significantly better views than I’d probably have had along the valley bottom from Gaick Lodge. It also had the bonus of avoiding a potentially problematic river crossing by the lodge. And all across the tundra-like ground signs of evergreen shoots poking their way back through the ground were a stark contrast to the previous day where the only evidence had been rotting tree stumps.

The descent to a bridge at the north end of the loch was a bit of a knee jerker, through deep heather strewn with boulders but the views back along the valley to Gaick Lodge confirmed that the high route had definitely been the better plan. 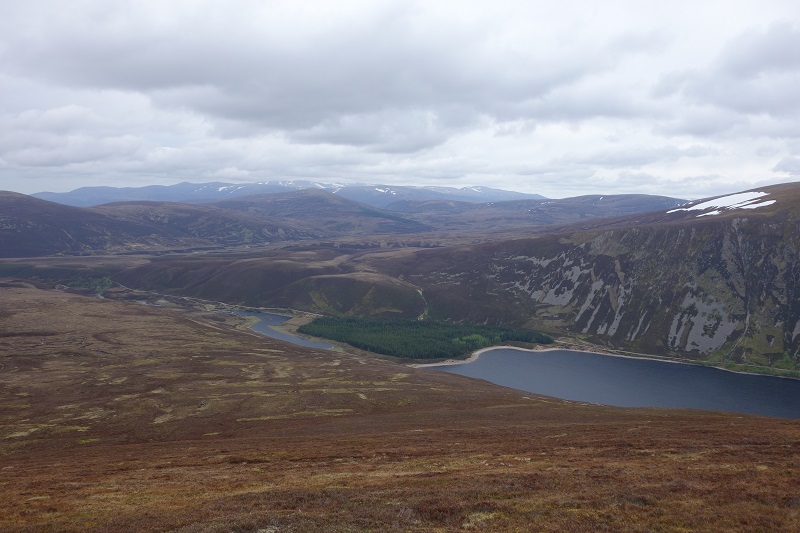 The loch was crossed easily by a narrow weir at it’s outlet, bringing me back to my planed route. Time for a sit down, a bite to eat and a brew. By now I had a sneaky suspicion I’d pack in a few more miles than planned today, they were passing all too easily. But when you’re not pushed for time it’s a simple pleasure to just sit a while and think.

Much of the rest of the day passed uneventfully. A short bog trot through a young plantation area over to meet the Allt Bhran, a couple of easy river crossings and then back upstream.

Looking back over Allt Bhran towards Bogha-cloiche (the middle hump)

About 3km upstream a short sharp climb alongside another small plantation connected me to an excellent stoney track running above the treeline. And rounding the edge of the trees you could certainly see how ferocious the wind is at times in this area. Along a 100m stretch the whole edge of the plantation had been peeled back like lifting a carpet, trees and all. Luckily today there was just that persistent cool breeze. 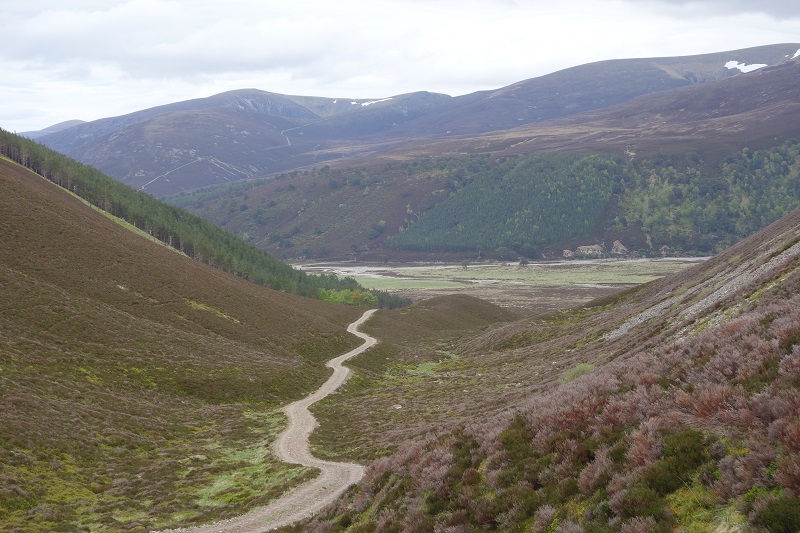 Then it’s a 6km march along a good track down to meet Glen Feshie at the floodplain south of Glenfeshie Lodge. By now well ahead of myself. In fact I was now where I’d planned to camp the following night and it was still only mid afternoon. By the time I’d camp this evening I’d be a full day and a half ahead of plan, and with a very easy couple of days walking ahead I was beginning to think I’d been a bit overly wussy with my route.

Something else I was being overly wussy with was river crossings. Wet boots, not for me ! Ten minutes stripping boots and socks, tying them by the laces around my neck, rolling trousers up above my knees and then donning my Vivo Barefeet. All sounds great until you sit down at the other side, dry your feet, put your boots back on, get yourself straightened…..and then walk ten yards only to find there’s another leg of the river to cross….and another.

Like an idiot I hadn’t bothered to take notice of the number of flows the river split into across the flood plain as I’d descended towards it. I went through that daft routine no less than four times before finally emerging onto the track on the east bank.

The next few km along the Feshie was a beautiful stroll with majestic Scots Pine gracing the track and the river bank. It didn’t take long to decide I’d pitch as soon as I found a decent spot, it would be a shame not to linger for the evening and enjoy it.

A nice looking spot appeared soon enough, looking nice to a fair few other challengers too by the looks of all the tents springing up. A very tall, strapping and well spoken gent wandered over as I surveyed the glade and asked ‘We’re you planning to camp here tonight?’. Now I don’t know if a week of solo walking had turned me into a wary loner, but I have a vague recollection of responding tersely with a simple ‘Why?’, as if  I was about to be told to ‘clear off and find my own spot’.

There are ways to introduce yourself to somebody whose blog you read avidly, and there are rude gaffs. Luckily for me Mr David Williams of Fellbound fame is far too pleasant a bloke to take offense from a gaff and instead gave me a tour of the site’s facilities and pointed out a few suitable spots…..all at least 50 yards from his tent.

David wandered off in his toasty duvet jacket to do a spot of TGO networking with others around the glade, leaving me to spend at least a half hour deliberating over a pitch. Indecisiveness is a bane of my life sometimes, especially when the sun hasn’t shown it’s face all day and I’m beginning to develop a chill.

The cool breeze blowing through camp had by now promoted itself to a cold breeze so I slung up my makeshift Trailstar door and retired behind it to warm myself up with a brew. Whipped up on a singer sewing machine from an old wind break, this would be it’s first public viewing. At the first sign of scoffing I would be off to sulk in another glade. 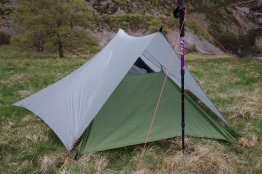 So all in all a pleasant if easy days ramble, and the last stretch of the TGO I would walk alone. From here on the magnetic pull of a well worn line to the coast, and the enjoyment of walking and talking would be the theme (Mr Fellbound figuring in a great deal of both). 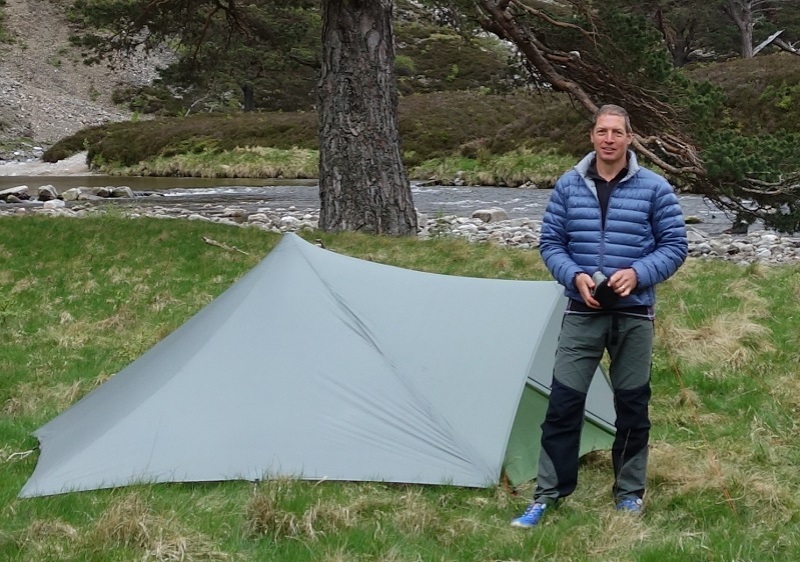