Camped on top of Whernside

A month or so ago I posted about a new pole set up my MLD Duomid. This used a length of carbon fibre pole to join a new pair of trekking poles I’d bought (Fizan Broad Peak). It was a neat solution and very light.

After a couple of nights recently in extremely high winds, I’ve been forced to go back to the drawing board and look again for a solution. And it’s forced me to think about one of the major short-comings of Cuben fibre as a tent material. It just doesn’t ‘give’.

At the beginning of May my brother and I camped on top of Whernside in the Dales, on what turned out to be an extremely stormy night. Even sheltered behind a wall over a meter high, my cuben Duomid took a severe battering with winds gusting at over 60mph (95 kmh).

The tent stood it’s ground, but at 3am I was woken by that familiar crack that cuben fibre makes in wind, with the whole structure thrashing about violently. Turning my torch on I noticed that my pole had shortened by at least 10cm, the carbon fibre joint disappearing inside the trekking poles. So the Duomid had of course then completely slackened off all around and the pole was now being thrashed back and forth in the wind. 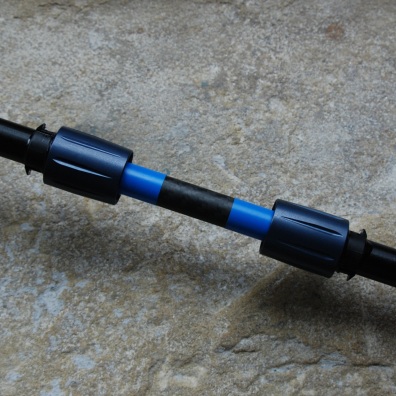 If you’ve ever tried to extend a pole in a Mid in high wind you know what I’m talking about when I say it was an almost hopeless task. Grasping the pole with both hands I was barely able to lift it off the ground with the force of the wind bearing down on the tent. Letting go with one hand in order to re-lengthen the pole with the other hand was impossible. I propped the shortened pole up on the toe of my boot to try and take the slack out of the Duomid, but by 5am I was fearing for the tent itself, so we struck camp and bailed out in the teeth of some pretty ferocious gusts and beat a retreat down off the top.

All this downwards force also raises the question about how sensible it is in a cuben mid to offset (slant) the pole, since that downwards force would then tend to buckle or bend the pole if it’s not vertical.

Cuben fibre was after all developed for use in boat sails, and in that use you actually want all that wind energy to be transferred through the sail into forward motion, and not absorbed by the sail. Giving a tent forward motion into the ground will eventually break something.

The more I think about it, the more I begin to wonder whether cuben fibre really is the material we’ve all been waiting for. Add in dyneema anchoring and you have a very unforgiving strucrure. There’s something comforting in the ability of silnylon to be pulled and stretched into a taught shape, and still absorb and dissipate whatever the winds throws at it. It’s not perfect either of course, but it’s proven itself to me.

So what’s the solution ?

If my trekking poles had ‘shock absorbers’ I’d be inclined to activate this in at least one pole section in high wind so that the pole can absorb gusts. But the Fizan Broad Peak do not have this, so I’ve had to seek some other way of putting an energy absorber into the pole joint. 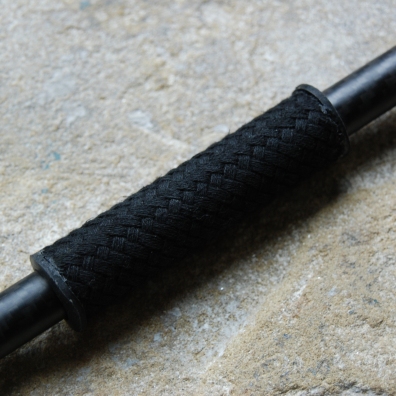 What I’ve come up with is still very simple, but may just work. I’ve taken a short (75mm) section of braided hydraulic hose, which just happens to have the same internal diameter as the external diameter of my carbon fibre joint, and bonded a rubber washer to each end.

Slid tightly onto the carbon pole this then sits between my trekking poles when they are joined. Pressing down on the whole set up shows it has a satisfying amount of give, but doesn’t depress too easily. Hopefully just enough to absorb gusts of wind and protect the poles themselves.

I’ve yet to try it for real in the field, but I’m hopeful it may work.

However one final observation. With all this tinkering about with my trekking poles to try different ways of joining them, I’ve begun to notice some slight wear on the plastic ends of the bottom trekking pole sections where these slide inside the adjacent pole. It makes me wonder about the long term impact of continually taking your poles apart, on a daily basis. Poles surely weren’t designed for this and at some point they may themselves fail.

Bottom line is that my experience so far with the Cuben Duomid hasn’t lent it to being my ‘go to’ shelter. Long term confidence and experience says I would probably still prefer a shelter in silnylon, and one which doesn’t require trekking poles to be extended in order to maximise the useable area of floor pan. Perhaps the Cuben Duomid is just not the tent for me.